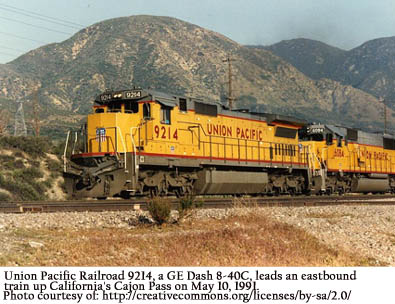 Air pollution resulting from operations at the ports of Los Angeles and Long Beach in California has become a critical problem, with a huge impact on the health of the surrounding population. A similar situation exists in many other areas of the state. Health care costs resulting from low air quality are expected to exceed $200 billion in California over the next fifteen years. Recent efforts to clean up the diesel engines used in ships, locomotives, trucks and off-road equipment are producing significant improvements, but the rapidly growing volume of freight shipments threatens to overwhelm these efforts and drive air quality even lower.

LaunchPoint Technologies has discovered a solution—the “Rail Motor” (patent pending). This is a new type of linear electric motor that could propel standard rail vehicles, including locomotives and freight cars, with no modification of the vehicles. The motor would be installed in the track, would require no mechanical connection to the vehicles, and would be electronically controlled by the train engineer via a wireless radio connection. It may be capable of providing even higher motive power to a typical freight train than is currently practical with diesel locomotives (such as the additional power needed to transit the 4,190 foot-high Cajon Pass), and could also be used to brake trains descending steep grades, recovering the energy in the form of electricity. When employed in places such as the Alameda Corridor or the Cajon Pass, it could result in totally electric operation of freight traffic, removing local sources of air pollution entirely, while increasing the speed and throughput capability of the rail lines.

This is a simple solution that solves the vital need for cleaner air. Tier Two and Tier Three reductions in diesel particulate matter (DPM) production are expected to be overwhelmed by the increase in freight traffic through the ports of Los Angeles and Long Beach. Rail Motors don’t just decrease DPM – they eliminate it by allowing railroads to operate electrically in critical areas. Outside those areas, they could continue to operate as before with no cost or schedule penalties. Removal of DPM from urban areas could result in a huge reduction in health care costs and mortality.

Rail Motors can be installed on standard railroad tracks in any location where reduction of DPM is important. Unlike hybrid locomotive technology, Rail Motors are completely effective with high power line haul engines.

A Rail Motor is mounted inside or outside of standard railroad rails, allowing an existing track to be retrofitted with electric propulsion technology. The motor interacts with the steel wheels of standard railroad cars, in effect using them as the moving components of the motor. The total amount of thrust and power that can be applied to a train, or other steel-wheeled vehicle, is thus proportional to the total number of wheels on the train or vehicle. For example, when used to propel a train with 100 cars, each of which has eight wheels, a rail motor could provide 800 times as much thrust and power as it could provide to a single wheel.

It's Really That Simple

Breakout sessions examined the pollution problems faced by residents near the ports of Los Angeles and Long Beach. Several pertinent presentations delivered during these sessions were:

Use of the Rail Motor would facilitate emission reductions in California, and help users to meet emission standards for DPM pollutants from diesel sources.

Rail Motors can be selectively installed in non-attainment areas, such as the Alameda Corridor and the Greater Los Angeles basin, in effect converting the railroads to electric operation. Much of the freight currently carried out of the ports by truck could instead be carried by “electric” rail and transferred to cross-country trucks at facilities outside the LA basin. A large fraction of the port-related DPM could thus be eliminated completely.

Clearly, achieving acceptable levels of air quality will require more than just cleaner diesels. Powering vehicles with electricity from the statewide grid could remove local sources of air pollution entirely, but if this is to be successful it cannot adversely impact freight throughput. Several ideas have surfaced in an effort to address this problem, however they have severe constraints to feasibility, whether technical or cost-effectiveness.