LaunchPoint’s fully controlled VVT system achieves a degree of variability that no other commercially implemented technology has claimed. The electromechanical system that has been developed is able to continuously and independently vary the valve duration and phase based on any operating conditions available to the controller, such as engine speed and load. We have also resolved the known drawbacks associated with an electromechanical VVT system by incorporating a novel cam mechanism into the design. This enables precise, high-speed control over the valve's motion with low electrical energy requirements.  Two prototypes were fabricated for testing with different configurations of the cam mechanism in order to optimize performance and maximize durability of the system.

The primary prototype was tested on the lab bench and on a Rotax 500cc one-cylinder engine with a modified head. In order to properly characterize the valve transitions, more than 500 datasets were recorded and processed to determine the average switch times, landing velocities, and energy consumption (variations in the system performance described below are differences between the open and close switches).  Using a standard industry definition of 0.7 mm to 0.7 mm (the time it takes to switch from within 0.7 mm of the open and closed positions), the average switch time was 1.63 – 1.97 ms.  Although the switch times are very fast we were able to precisely control the valve seating and maintain an average valve landing velocity of 0.01 m/s.  The average energy consumption per switch was 2.63 – 3.15 J, which corresponds to an average power consumption of 48 W at 1000 RPM and 241 W at 5000 RPM.  In order to operate robustly, the actuator and controller were designed to handle large changes in operating temperature and differences in pressure across the valve. The controller is able to compensate for the significant changes in the actuators electrical resistance as well. 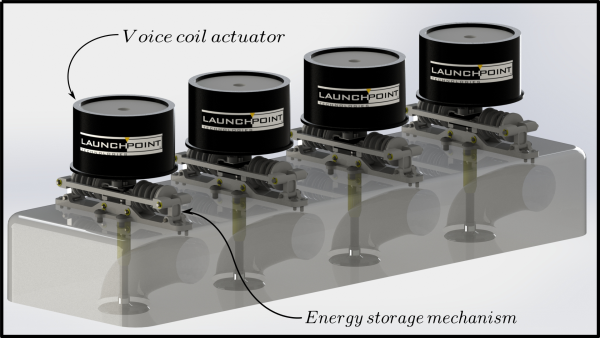 The secondary prototype was designed to have lower switch energy and increased durability.  The system performance was experimentally measured to have average switch times of 2.73 – 3.82 ms, with an average landing velocity 0.07 m/s, and average energy consumption per switch of 1.33 – 1.45 J.  The energy consumption corresponds to an average power consumption of 23 W at 1000 RPM and 116 W at 5000 RPM.  With further controller tuning we are confident that we could achieve an average switch time of less than 2.5 ms with minimal increases to the switch energy.  Endurance testing was performed to verify the durability of the system.  After more than 1 million cycles (corresponding to 2 million engine revolutions), the system was still functioning well and the cam surfaces had minimal wear.


Current research includes improvements to the control software for more energy-efficient motion control while maintaining fast transition times and low valve-seating velocities. We are also in the process of running endurance tests to determine the durability and fatigue life of the mechanical components. The target is to reach 500 million cycles which is on the order of the number of revolutions a car engine is expected to last. Longer-term work includes optimizing the system to minimize power, emissions, and fuel requirements. LaunchPoint is currently seeking strategic partners and investors to bring this technology to market.