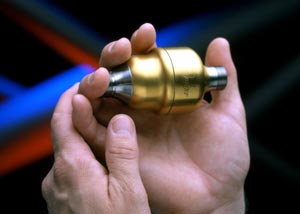 Each year, thousands of cardiac disease patients wait for healthy donor hearts for transplantation. Due to the current shortage of donor hearts (approximately 2300 per year), these patients often require supplemental circulatory support until a transplant becomes available. This supplemental support is often provided by a mechanical heart pump or left ventricular assist device (LVAD). But mechanical-bearing pumps are prone to wear, so they are not suitable for long-term implantation.

The Streamliner VAD, developed in conjunction with LaunchPoint Technologies, was the first magnetically-levitated Left Ventricular Assist Device (LVAD) to progress to animal trials.

An early collaboration with Dr. James F. Antaki and his interest in the application of magnetic bearings, led to an award of a contract with the University of Pittsburgh (UoP) for participation in the Artificial Heart Project in March 1995.

The “Streamliner” began with an early Conical configuration prototype shipped to UoP in June of 1996. HG3B, a later VAD configuration delivered in June 1998, was an implanted pump with voice-coil thruster, efficient toroidal-wound motor-stator and draw-nut mounted sensor.

All versions of the Streamliner pump are based on a linear-flow topology. HG3C, a pump design from 1999, was remodeled for ease of assembly and disassembly and incorporates Titanium parts. The work was then concluded at the termination of the UoP contract. UoP has since sold their patent rights to Medquest (now Worldheart).

The pioneering work on the Streamliner has led to several related projects, including the Toddler VAD (TVAD) and the Pediatric VAD (PVAD).