A novel magnetic valve system being developed at LaunchPoint Technologies could enable the implementation of electronically-controlled variable valve timing in camless internal combustion engines. The linear-motion actuator implements the patented magnetic spring technology originally developed by LaunchPoint for an aerospace application. Outstanding performance characteristics seen in the first bench-top prototype have led to the award of a Phase II Small Business Innovation Research (SBIR) grant from the National Science Foundation for continued development. 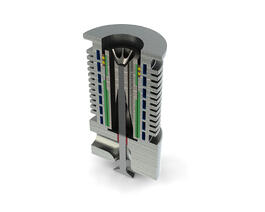 Despite the introduction of hybrid-electric and electric cars, the vast majority of vehicles driven worldwide will continue to use internal combustion engines for several decades. To meet stringent emissions regulations and improve fuel-efficiency, new engine technologies are necessary. The "Holy Grail" of combustion control for internal combustion engines is variable valve timing. At each engine speed and operating condition, the valve timing can be optimized, enabling double-digit improvement in fuel-efficiency, torque, and emissions reductions.

Thus far, however, variable valve timing technology has been either too costly to implement on conventional vehicles or far less effective and robust than desired. LaunchPoint's new valve system could change that. The valve actuator is based on the patented magnetic spring technology (U.S. Patent 7,265,470) originally developed by LaunchPoint for an aerospace application. A bench-top prototype developed during the Phase I effort demonstrated outstanding performance characteristics. Test results showed that the actuator was able to traverse an 8mm stroke distance in 3 milliseconds with consistent switching trajectories and very soft landings. 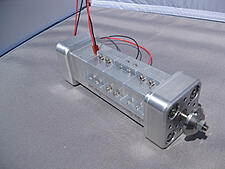 Mike Ricci, VP of Engineering at LaunchPoint and Principal Investigator for the Phase II effort praised the U.S. SBIR program--"It is only with grants like this one from NSF that valuable new technologies being developed at small companies have a chance to get to market. This funding will enable LaunchPoint to bring the technology to a point where it is attractive for investors to help with commercialization."

The goal of the Phase II development effort is to reduce the switching interval even further while improving the robustness of the design. LaunchPoint engineers will design, build, and test a second generation of the magnetic valve actuator. The actuator will then be integrated into a complete engine subsystem and tested on an experimental engine.

Magnetic valve actuators can be applied to a wide variety of internal combustion engines. Actuators of this type would eliminate the numerous engine components required for a typical camshaft drive, thereby decreasing manufacturing and maintenance costs and increasing reliability. Magnetic actuators could be designed into new engines and retrofitted to existing engines. The widespread adoption of these actuators would substantially decrease petroleum usage and the associated production of greenhouse gases and air pollution while promoting the country's energy independence.