LaunchPoint Technologies Inc. recently completed a NASA Phase I SBIR* to investigate the design of a “Hybrid Electric Propulsion System for a 4-Passenger VTOL Aircraft”.  The advancement of hybrid-electric propulsion systems for rotorcrafts enables vertical takeoff and landing (VTOL) vehicles to take advantage of aerodynamic efficiencies that can reduce fuel consumption and emissions compared to conventional rotorcraft vehicles. 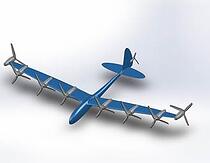 Unlike conventional internal combustion engines, or high-speed turbine engines, the high power-to-weight ratio and energy efficiency of electric motors is conserved when the motor is scaled to a smaller size.  A distributed electric propulsion system for a VTOL aircraft can exploit aerodynamic benefits that increase the lift to drag ratio by 4- to 5-times that of conventional helicopters (http://ntrs.nasa.gov/search.jsp?R=20140001088).  This yields a fourfold increase in range while maintaining the VTOL and hover capabilities of a conventional helicopter.

LaunchPoint Technologies is seeking development partners who wish to license the architecture and technology; or who wish to fund the development of custom turn-key hybrid propulsion systems for aircraft.